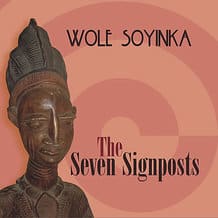 Soyinka embarks on an incursion into Yoruba cosmology, distilling.

Be the first to review “The Seven Signposts” Cancel reply