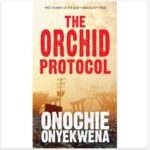 Diaries of a Dead African by Chuma Nwokolo

The Signature of All Things
0 out of 5
( There are no reviews yet. )

DCT agent Patrick Emenalo returns to work on the same day there is a bombing at a popular fast food joint in Lagos. Dark Cell, a terrorist group, claims responsibility and demands the release of Red Baron, arms smuggler and crime boss.

Patrick, caught in a game whose rules are set by shadowy crime syndicate, The Orchid, must race against time to stop the terrorists before they strike again.