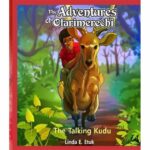 The Gathering of the Tribes
0 out of 5
( There are no reviews yet. )

The Adventures Ofaremerechi; the Talking Kudu shows the adverse effect of war and other human activities on the environment and wildlife. The theme of climate change and animal extinction is pervaded in the chapters of the book. Most of the characters in the book are either endangered or extinct.
The book shows in the first and second chapters how the tropical rainforest of Africa is eroded by war killing many animals and destroying their habitat forcing the survivor to relocate to safer places in north, south and central Africa. Kudu; an endangered African antelope tells a story of how his herd moved from the tropical rainforest to the thorn bush in arid savannah after been attacked by air raids.
The book further develops the theme in the great Moa’s resentment towards humans accusing man for invading their habitat and hunting her kind for food. The necessity to keep all animals safe from extinction becomes a key plot, yet accomplishing the task is not an easy feat. Ofaremerechi had to risk his life to save Kudu’s. Ofaremerechi made a promise to the great Moa to keep animals safe from human violence. The story shows the tenacity required to save the animal kingdom and to protect the circle of life.

Be the first to review “The Adventures of Ofarimerechi” Cancel reply