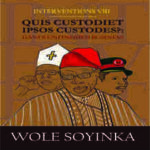 The Burden of Memory The Muse of Forgiveness

InterInventions: Between Defective Memory and the Public Lie
0 out of 5
( There are no reviews yet. )

There is a very subjective sense, near mystical, in which I feel that the mantle has been placed on my shoulders to respond to the rhetorical question posed in the title of this address: Quis custodiet ipsos custodes? Fortunately this also compels me to discharge the onerous burden of conforming to a moral and legal caution which goes – ubi jus ibi remedium. I promise this is the last time I shall talk Latin, no matter how much Greek provocation we encounter along the way: That last item means simply: he who comes to equity must come with clean hands. For four years, Mr. President, the nation had accorded you such servile obeisance on the understanding that you inherited a weak state and that anything after Abacha was tolerable. The people were optimistic that you had the credentials to lead them to the Promised Land. What will now pass as your mythical image of a great achiever and statesman prevailed on even the doubting Thomases to believe that you were divinely anointed. But barely two years into your ﬁrst term, it was clear to even your most jaundiced admirers that you are not after all the Messiah this nation has been waiting for. –The Devil Is It, Mr. President: (An Open Letter to President Obasanjo – January 21, 2004) by Dangiwa Abubakar Umar, Rtd Col.