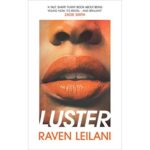 The Evening and the Morning

A taut, sharp, funny book about being young now. It’s brutal and brilliant.

Luster sees a young black woman figuring her way into life as an artist and into love in this darkly comic novel. She meets Eric, a digital archivist with a family in New Jersey, including an autopsist wife who has agreed to an open marriage. In this world of contemporary sexual manners and racial politics, Edie finds herself unemployed and living with Eric. She becomes a hesitant friend to his wife and a de facto role model to his adopted daughter. Edie is the only black woman young Akila may know.

Be the first to review “Luster” Cancel reply