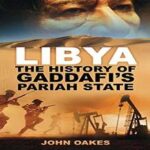 The Boko Haram Reader: From Nigerian Preachers to the Islamic State
0 out of 5
( There are no reviews yet. )

When the oil-rich Kingdom of Libya descended into corruption and irresolution, a young Libyan army officer named Muammar Gaddafi seized power in a brilliant coup on 1 September 1969. Under his rule Libya became a pariah state, harbouring terrorists from nearly every dissident group in the world and accumulating an enormous arsenal of lethal weaponry. The late Gaddafi was autocratic and cruel, and his people finally rose up against him in February 2011. But how did he survive for so long? In this book John Oakes traces Libya’s colourful history and details the events which shaped Gaddafi’s personality, the influences which moulded his career, the security apparatus which kept him in power and the human rights violations he committed. It is a story of Roman legions, Barbary pirates, slave traders, camel caravans and Ottoman Beys. Of Italian colonists, Bedouin tribes, Texan oil barons, the Lockerbie disaster and mass murder in the Abu Salim jail. Most poignantly, it is the story of the human cost of freeing Libya from Gaddafi.

Be the first to review “Libya: The History of Gaddafi’s Pariah State” Cancel reply