Intervention VII:Green Cards, Green Gods – A Sequel to The Republic of Liars 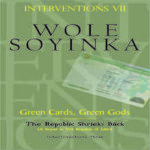 Intervention VII:Green Cards, Green Gods – A Sequel to The Republic of Liars

InterInventions: Between Defective Memory and the Public Lie

Intervention VI:Between Defective Memory and the Public Lie – A Personal Odyssey in The Republic of Liars II
0 out of 5
( There are no reviews yet. )

“Basic education, sometimes known as Home Upbringing matters, and nurturing remains a dedicated undertaking. Internet accessibility is no substitute. Like the lyrics of that ancient Lagosian song ‘Eko gb’ole o gb’ole’, Internet accommodates robber and indolent in equal, non-discriminating measure. The fact however remains that facts do remain facts, and one incontestable fact is that at no time did WS make any pronouncement, public or private, that invited any of these posturing mutants to come and ‘play with him’, least of all on a bicycle that even he has never considered his, only borrowed for a term, liable to be reclaimed or relinquished by either contracting party.” Taken somewhat aback by the unexpectedly viral response which accompanied his decision to keep his promise to destroy his American Green Card, if Donald Trump was elected president, Soyinka – with the help of a few other contributors to this volume – takes on his trolls – online as well as off.

Be the first to review “Intervention VII:Green Cards, Green Gods – A Sequel to The Republic of Liars” Cancel reply