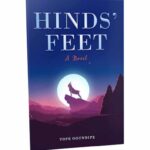 HINDS FEET TELLS THE STORY OF FOUR WOMEN.
Vera thought marriage would be the perfect escape from the embarrassing complications of her childhood, it turned out she was seriously mistaken. Too much damage had already been done on her personality, enough to stress any marriage. But worse than that, Vera’s precarious half-sister Tonya keeps inciting her husband, insisting that there were dark secrets from Vera’s past responsible for the loss of all their children.
Mrs. Fenwa is a placid, gracious and kind woman who has managed to keep the rather inhuman treatment she received from her husband in the first five years of marriage from poisoning her children or limiting her future. But Michael suddenly reappears, as suddenly as he had disappeared seventeen long years ago and Helen Fenwa was stunned at how totally unprepared she was for his return.
Adesola is greatly admired by most, respectable and devout, with ready answers and immediate comfort for the troubled. Yet it would seem the only problem she could not solve was hers. Even so, the deep resentment from the one person who mattered the most in her life did not prepare her for the complications of ‘the other woman.’ The issues run deeper than Adesola could find answers.
Erin suffers from low self-esteem resulting from the absence of a loving and protective father figure in her growing years and is basically prone to turbulent relationships with the opposite sex. Beautiful, glib and gullible; Erin is set to find out that all her definitions of love are wrong and what the measure of a real woman is.
These four women teach at the Orange High School but they are to share much more in common as they support one another on their journey to find answers.

Be the first to review “HINDS’ FEET” Cancel reply