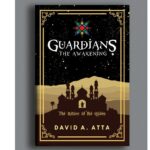 Queen Amina of Zaria, Guardian of the North, on the verge of losing her final battle, finds herself trapped in a cave with Habiba, the last of her queen’s guard. Qaos, an alien entity and her old adversary, reveals himself and demands for Queen Amina’s staff, a magic relic which is the source of her power. Knowing her fellow Guardians have fallen, with their relics either lost or taken, Amina uses the staff to send Habiba back to Zazzau along with 2 other relics; a sword and a ring; she then sends the staff itself 400 years into the future and, finally she disappears.

Qaos is enraged that Queen Amina has thwarted him, but he rejoins his brother Qasm and they set out about their original task to sow division and wreak destruction and death across Northern Nigeria.

Hadiza is a simple university student in Zaria. Unknown to her she is also a great, great, grand descendant of Queen Amina. Her stepfather Buba, an unscrupulous fellow, arranges for her to be kidnapped to get a cut from the ransom her wealthy mother would surely pay. Qi and Qo, minions of Qasm, discover Asabe, a teenager in Zamfara who has supernatural abilities; she is impervious to bullets and can see into other dimensions, she also happens to be the great, great, granddaughter of Habiba.

Qasm manipulates Nigerian President Uchenna Osuagbu to pull Nigeria out of a Pan-African treaty on inter-religious harmony; this sparks violent religious riots nationwide that cause Igbo policewoman, Ugochi to relocate from Zaria to Abuja for safety. Asabe rescues Hadiza from her abductors and gives her Queen Amina’s ring and sword; these relics lead them to Matsirga falls in present day Kaduna state where the staff is hidden. Queen Amina appears to Hadiza, gives her the staff and anoints her as her successor just as Qaos appears and attacks her. Hadiza defeats him, but he escapes with Qasm’s help. The fight shifts to Abuja, the treaty signing is about to take place with President Osuagbu still insistent on not signing.

Ugochi has been drafted into the security detail for the conference and she helps Hadiza gain access to the president so she can try to break Qasm’s hold on his mind. Qaos, fearing that Qasm’s plan is about to be foiled, manipulates a Muslim presidential guard to assassinate President Osuagbu, but Hadiza saves him. President Osuagbu comes to himself and signs the treaty. Hadiza then faces Qaos and Qasm in battle and defeats them both. They depart to their own dimension but promise to return. Hadiza begins her quest to discover the present day reincarnations of the remaining Guardians, starting with Sango.

Be the first to review “Guardians: The Awakening” Cancel reply