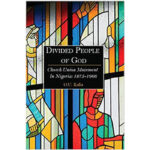 Ugo and Sim Sim “What is Down Syndrome?”

On Wings of Light: Reflections on Cybernetics, Africa & the Wider World
0 out of 5
( There are no reviews yet. )

In 1974, when the first edition of this book was published, Dr. Ogbu Kalu (1942-2009) was a young, devout Presbyterian minister and scholar who believed that the unity of the Church of Nigeria was not only possible but necessary. Indeed, an ecumenical movement had seen a similar need for unity and predicted that this unity would occur in December of 1965. The vision was to create not multiple churches of many denominations, but rather one complete, unified church composed of Anglicans, Methodists, and Presbyterians. However, this was not to be, due to inner negotiations breaking down. Dr. Kalu thus took it upon himself to write a study about the impulses and arguments toward unity and why unity is the true intention of God. This second edition’s publication honors Dr. Kalu’s call to unity, and it allows the modern reader to ponder what unity means in the twenty-first century and the current Church of Nigeria.

Be the first to review “Divided People of God: Church Union Movement In Nigeria: 1875—1966” Cancel reply