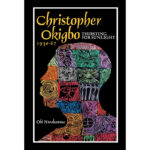 Tiger Woods Paperback
0 out of 5
( There are no reviews yet. )

Christopher Okigbo, once described as ‘Africa’s most lyrical poet of the twentieth century’ was killed in September 1967, fighting for the independence of Biafra. The Sunday Times described his death as ‘the single most important tragedy of the Nigerian civil war’. The manner in which Okigbo died typified the passionate, tortured and dramatic quality of his life. Widely considered along with Wole Soyinka and Chinua Achebe as part of modern Nigeria’s greatest literary triumvirate, Okigbo’s death promoted him to cult status among subsequent generations of African writers. This is the first full biography of the Nigerian poet. It places Okigbo within the turmoil of his generation and illustrates the aspects of his life that gave rise to such an intense poetry. How did his experience in the prestigious, English-type boarding school, Umuahia, where he was known more as a sportsman than a scholar, influence his life and later choices? Why was he sacked from the colonial service, and how did that lead him towards a search for private recovery, and ultimately towards poetry? What led him to take up arms? In other words, how did his eclectic pursuits as high school teacher, university librarian, publisher, gun-runner and guerrilla fuel his poetic drive? OBI NWAKANMA, journalist and poet, is Assistant Professor in the Department of English at Truman State University, Kirksville, Missouri. Nigeria: HEBN (PB)

Be the first to review “Christopher Okigbo 1930-67: Thirsting for Sunlight by Obi Nwakanma” Cancel reply