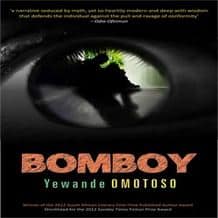 Leke is a troubled young man living in the suburbs of Cape Town. He develops strange habits of stalking people, stealing small objects and going from doctor to doctor in search of companionship rather than cure. Through a series of letters written to him by his Nigerian father whom he has never met, Leke learns about a family curse; a curse which his father has unsuccessfully tried to remove. Bomboy is a well crafted and complex narrative written with a sensitive understanding of both the smallest and magnitude of a single life.

‘Bomboy surprises and delights, sings at turns, as it straddles the past and the present, bringing into focus cultural beliefs while examining the intimacies and complexities of bonds of family and friendship. What strikes me most is the originality. This fine debut, firmly rooted in contemporary consciousness, is story-telling of note which whets the appetite for more.’

‘This is a novel bursting with elegance, written by a young author brimming with genuine promise. Yewande Omotoso is a stylist with a literary vision.’

‘I hope, sincerely, that this golden debut fills every barren space on the continent from the Karoo to the Sahara with the chlorophyll of hope…’

Be the first to review “Bomboy” Cancel reply