A Man of the People (Penguin Modern Classics) 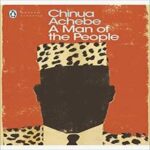 A Man of the People (Penguin Modern Classics)

Anthills of the Savannah (Penguin Modern Classics)
0 out of 5
( There are no reviews yet. )

From the renowned author of The African Trilogy, a political satire about an unnamed African country navigating a path between violence and corruption

As Minister for Culture, former school teacher M. A. Nanga is a man of the people, as cynical as he is charming, and a roguish opportunist. When Odili, an idealistic young teacher, visits his former instructor at the ministry, the division between them is vast. But in the eat-and-let-eat atmosphere, Odili’s idealism soon collides with his lusts—and the two men’s personal and political tauntings threaten to send their country into chaos. When Odili launches a vicious campaign against his former mentor for the same seat in an election, their mutual animosity drives the country to revolution.

Published, prophetically, just days before Nigeria’s first attempted coup in 1966, A Man of the People is an essential part of Achebe’s body of work.