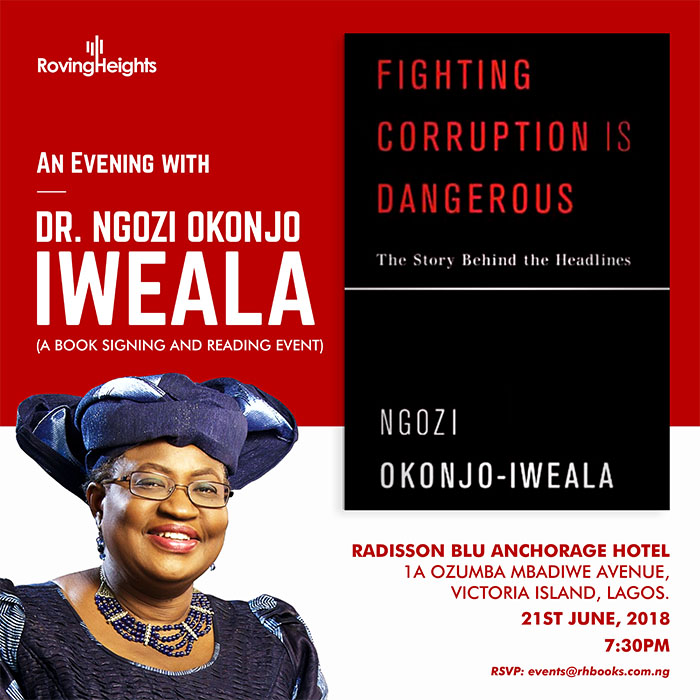 Rovingheights, a Lagos online bookstore, will on Thursday, 21 June 2018 host Dr. Ngozi Okonjo-Iweala, Nigeria’s former minister for Finance and author of widely acclaimed book “Fighting Corruption is Dangerous” to an evening of reading and book signing.

The event which is slated to hold at Radisson Blu Hotel, Victoria Island, Lagos is Dr Okonjo-Iweala’s first engagement with a Nigerian audience since the international release of her memoir in April 2018. It will commence at 7.30pm.

Published by the Massachusetts Institute of Technology Press, “Fighting Corruption is Dangerous: the story behind the headlines” is a timely account of Dr Okonjo Iweala’s stint as Nigeria’s immediate past finance minister and her spirited attempt to plug leakages and take on vested interests hobbling the growth of the Nigerian economy. The audacious book also details the personal costs of cleaning Nigeria’s Augean stables, which for the author included numerous death threats, culminating in the kidnap of her mother. In Dr Okonjo Iweala’s words: “It is risky for me to write this book, but also dangerous not to write it. It is risky because corrupt and vested interests described in the book may attempt to attack me and my family physically and reputationally as they have done before.”

According to Tobi Eyinade, Rovingheights’ co-founder,  “we have thought it wise to host Dr Ngozi Okonjo Iweala at this time to further interrogate the themes addressed in this all important work and also give our teeming readers an opportunity to engage her on the book and broaden the conversation about tackling corruption”

The special event is one of Rovingheights’ literacy interventions geared towards generating thoughtful conversations around books and deepening a vibrant reading culture in Nigeria.